HomePublicationsReportDelivering Insecurity: E-commerce and the Future of Work in Food Retail

Since the start of the coronavirus pandemic, millions of Americans have ordered groceries online for the first time. By some estimates, as many as 45% of all households—55.5 million—ordered groceries online for delivery or pickup during August.[1] Major grocery chains have seen their total revenue from online orders double or even triple from last year. Some surveys show as much as 25% of U.S. grocery sales were ordered digitally during the widespread lock-down period in May, and still nearly 12% in August.[2] Many customers, understandably nervous about the health implications of leaving their homes and sharing narrow grocery aisles with other shoppers, are exploring new ways of getting food to their homes. This not only has led to the surge in online grocery ordering, but also provided a stimulus to the struggling meal kit industry and expanded home delivery of prepared foods. For elderly customers and those with vulnerable health conditions, the expansion of these new food ordering and delivery channels literally is a lifeline in the context of the pandemic.

The growth of e-commerce sales for food has increased the number of jobs available at a time when unemployment across the U.S. economy has skyrocketed. Grocery workers now are seen as essential workers, even heroes. At times they even have received extra hazard pay. And yet media reports also are full of stories of ongoing low wages and poor working conditions, severe health risks, and employer retaliation against workers who speak out. These challenges are even greater for grocery and delivery workers hired as independent contractors, who have no legal employment protections, unstable earnings and hours, low levels of access to health insurance, challenges obtaining personal protective equipment, and legal and administrative barriers to accessing unemployment insurance should they not be able to work.

What are the broader implications of the recent surge in grocery e-commerce work? Will these jobs continue to expand beyond the pandemic and, if so, by how much? What kinds of wages and working conditions exist in different segments of the industry? What changes should people in more traditional grocery store jobs anticipate? As grocery e-commerce continues to grow, what options exist to improve working conditions for the workers affected by this trend?

“The future is already here—it’s just not very evenly distributed,” says science fiction author William Gibson. While the pandemic has provided a catalyst to the growth of online food ordering, it is simply accelerating trends that already were apparent in the industry before, but just not as widely distributed. In this report, we examine these longer-term, technology-enabled shifts in business processes in the grocery industry, looking both at trends before the coronavirus pandemic and the most recent shifts, to assess the implications for future changes in work. Our conclusions can be summarized thusly:

These changes in work are the result of the ways e-commerce is changing the traditional process by which consumers purchase food to be consumed in the home, which involves four distinct steps:

This traditional process now is being restructured, with three new distinct work processes, each enabled by different clusters of technologies, gaining hold in the industry, as shown in Figure A. 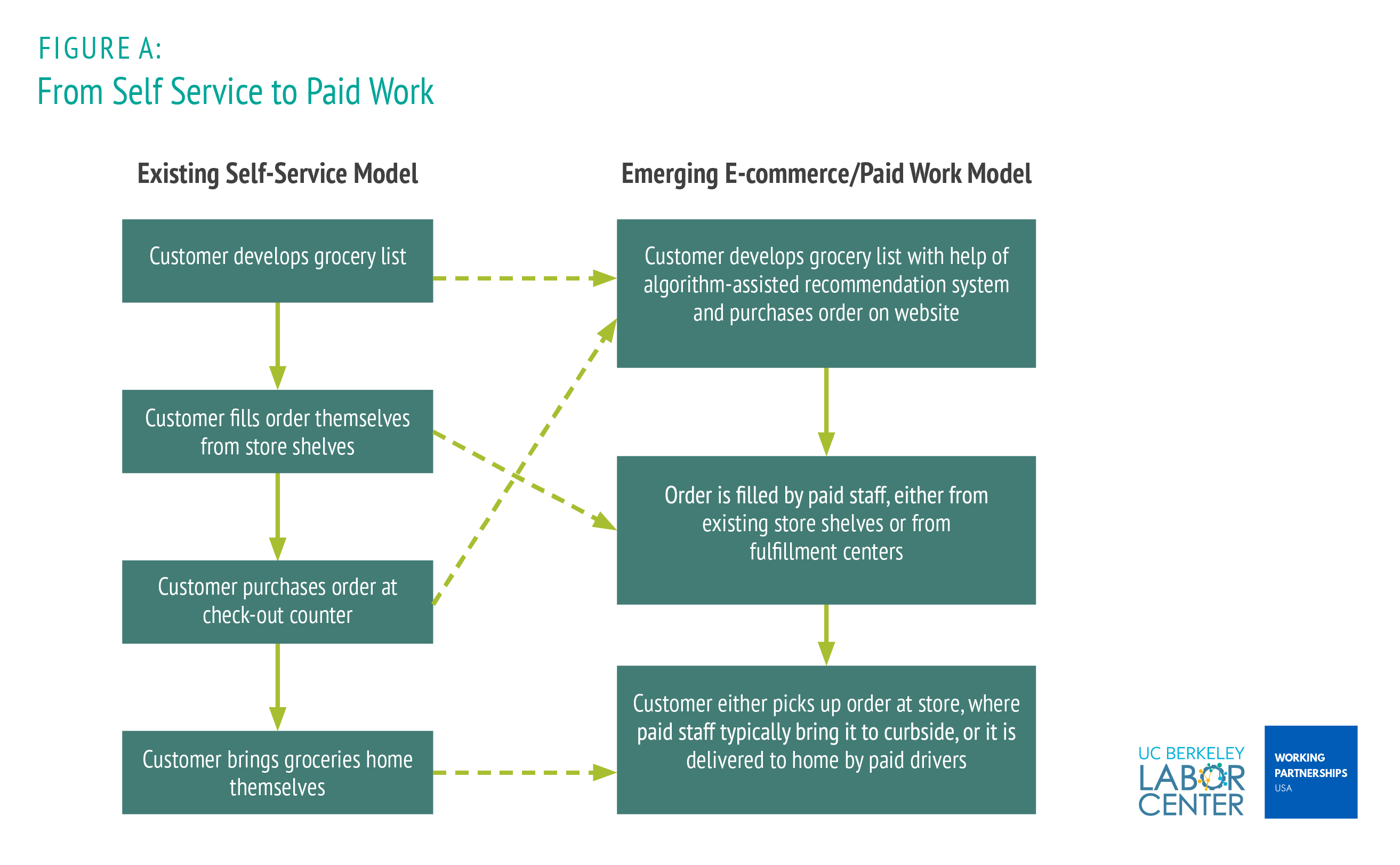 The emerging e-commerce-linked trends that are changing the process of obtaining food consumed at home include:

It also is important to recognize that customers purchasing groceries to cook their own food is only one way that customers get food to eat at home. Grocery stores have for many years sold semi-prepared meals (such as premeasured cake mixes or frozen pizza), or fully prepared meals (such as food sold in store-based delicatessens, or rotisserie chickens). New technologies are enabling a wide range of new prepared and semi-prepared food delivery options, which also are transforming traditional grocery work (see Figure B). 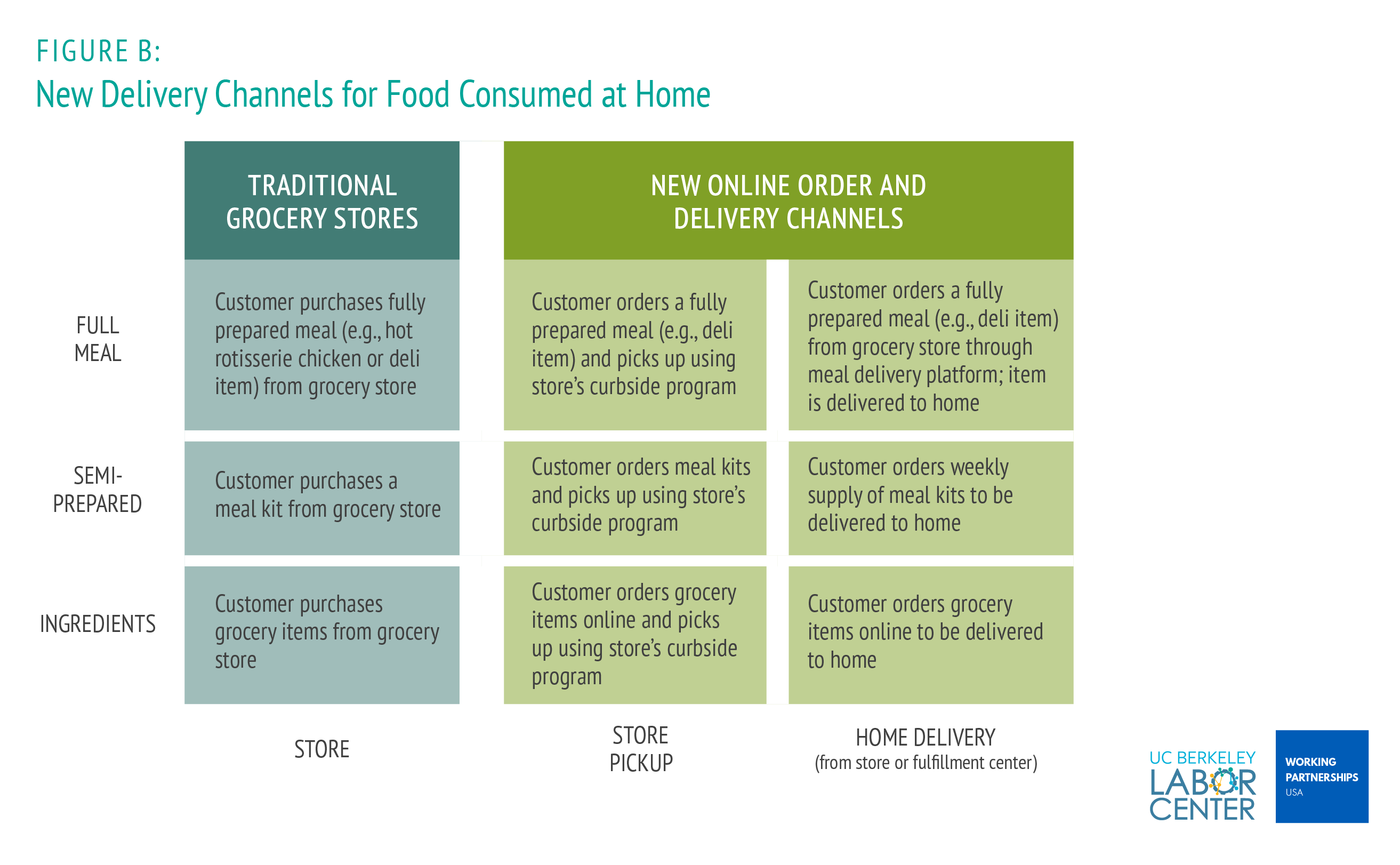 There are two growing forms of prepared and semi-prepared food delivery affecting the grocery industry:

There is widespread fear across the entire economy about the impacts of technology on jobs. The fear of automation—the robots are coming!!—permeates much of the discussion around technological change. This study of the growth of e-commerce in the grocery industry makes clear that the fear of technology-induced job loss is overblown. E-commerce growth in the industry has been moderate and manageable and, despite the surge caused by a historic pandemic, will remain a modest feature of the industry for the medium-term future. The growth of food-related e-commerce is contributing to job gain rather than job loss, creating new types of jobs and also expanding existing jobs in brick-and-mortar stores.

Perhaps what is more important than paying attention to the aggregate number of jobs, however, is that we pay attention to the ways technology may be enabling the restructuring of jobs, with implications for job quality for both new and existing positions. It also is important to recognize there is significant variation in the ways technology is linked with changing business practices in the industry, that there is nothing inevitable about these changes, and that there is significant potential for different business strategies and public policies to shape the outcome of these changes for working conditions and workers’ livelihoods.

Many new positions in filling orders and home delivery are insecure and low-paid positions. In many cases, people doing this work also are hired through online platforms, often as independent contractors, which denies these workers basic employment protections and benefits. These outcomes are not inevitable—in both order fulfillment and delivery positions, there are clear examples of in-house grocery employees doing the same tasks as workers deployed via platforms, but with greater job security and predictability of income, especially if they are represented by a union. In addition to decisions about whether or how to engage with online platforms, stores face other choices that have consequences for job quality in e-commerce. For instance, stores can leverage e-commerce channels strategically by linking online ordering and in-store offerings, such as expanding prepared food options and providing greater diversity of fresh foods.

Given the competitiveness of the industry and price pressures, however, it is not enough to rely on high-road business strategies to improve working conditions. Improving working conditions in e-commerce jobs will require proactive public policies and stronger systems of worker voice. This is especially urgent for the growing number of people doing fulfillment and delivery work who currently are being hired as independent contractors.

The most important strategy for protecting job quality for fulfillment and delivery workers is to narrow the criteria under which workers can be classified as independent contractors. This is important for ensuring these workers have access to the benefits and rights associated with employment, such as unemployment insurance, workers’ compensation, anti-discrimination and other types of legal protections. The passage of Proposition 22 in California, in which platform-based companies spent over $200 million to exempt themselves from a law designed to ensure platform workers had appropriate employment protections, sets a dangerous precedent of enshrining a new substandard category of employment into state law, underscoring the importance of stronger federal legislation against misclassification. Though far less effective, several interim or alternative strategies may exist where laws addressing misclassification do not (yet) exist, such as specifically including the on-demand workforce in local labor standards policies; creating and enforcing new minimum standards for meal and food delivery workers regardless of employment status that are high enough to ensure workers receive a living wage after accounting for all related business expenses; or requiring licenses for meal and food delivery workers and implementing a regulatory system that could be used to limit the number of workers who can access jobs at any moment in time, ensuring that those who are working can have sufficient earnings.

Ultimately, what is needed are more well-developed systems for workers in these new delivery channels to have a voice in company and industry business strategies. Unions have an important role to play in the industry, seeking to ensure that the growth of e-commerce doesn’t come at the expense of erosion of wages and working conditions. An estimated 15.1% of workers in the grocery industry were directly covered by a union contract as of 2019, and the number of workers indirectly benefiting from union protections is higher than that, due to some company efforts to more closely match union wages and working conditions to avoid union contracts.[4] In addition, the United Food and Commercial Workers (UFCW) recently began organizing Instacart workers, but challenges for new union organizing efforts persist. Reforming national labor law to remove obstacles to workers forming unions and engaging in collective bargaining is the most important step to helping more workers gain a voice on the job. Where unions do not currently exist, other organizations representing grocery store workers, like United for Respect, also can play an important role in addressing concerns of in-store employees, while organizations representing so-called gig workers, and other labor rights and labor law advocates, also will be important for addressing misclassification, low wages, and working conditions for platform-based workers.